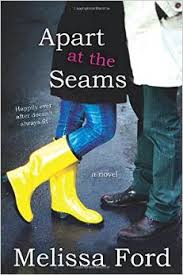 I read the first two books (Life from Scratch and Measure of Love) in Melissa Ford’s series during the months after Prop 8 was struck down in California and I was trying to decide if I wanted to get married. I really appreciated the discussion of marriage and what it means to different people at different times in their lives and relationships, so I was excited to read the third installment–Apart at the Seams–and continue the discussion where it left off in the second book.

Knowing that Arianna never wants to get married, why do you think Ethan kept pushing the idea rather than compromising?

I wondered this myself as I was reading the book. I think, for some people, marriage is the default final step, and they don’t know how to define their relationship without the traditions involved with getting married. Making that commitment is almost the easier thing to do, because the steps are so well established, you hardly have to think for yourself what any of it even means to you; the expectation that you’ll get married allows you to avoid really considering what it even means. Without taking those next steps, a couple has to define their relationship for themselves–and others. That can be hard to do and can require a self-awareness, and an awareness of social customs and norms, that not everyone has. I think ultimately Ethan didn’t think he was asking Arianna for more than was his right–he couldn’t understand her desire not to get married and since he fell within society’s norms by wanting to get married, he may have even felt like he didn’t have to. Getting married was the next step and he wanted their commitment defined in ways that were easily established by marriage. I also wonder if Arianna’s inability to explain her aversion to marriage made him keep harping on teh subject. Perhaps he thought she would easily change her mind, since she couldn’t make him understand why she felt the way he did.

As a reader I felt distanced and came away with the impression that I only knew what Arianna wanted me to know. I wasn’t convinced that she knew herself, or possibly even trusted herself all that much. I questioned her motivation and felt she “settled,” which made me sad. I feel no one should settle. Do you feel she was settling?

I appreciate this question because I also came away from the book feeling like I didn’t really get to know, or understand, Arianna fully. I understood many aspects of her–her desire to produce creatively, her drive to make a name for herself in her industry, her need to feel financially secure, the ways in which she was drawn to Noah and felt nourished by her friendship with him–but I never felt like I understood her relationship with Ethan or why she seemed so sure she loved him and wanted to be with him. In the end I wanted her to get together with Noah, even though I recognized that their relationship wouldn’t be sustainable in in the long term (Noah didn’t seem like the type who would be supportive to a single mother of a small child), because I just didn’t understand what Ethan was bringing to the table that made him worth looking past the issues they were having (and it seemed, would continue to have). I also had the feeling that she was settling with Ethan, that she could have found someone who would have been a better fit for her. I understand the idea that opposites attract, and that ultimately Arianna believed they would be able to ground each other instead of holding each other back, but I just didn’t feel like she felt as passionately toward Ethan as he did toward her (or she did toward Noah, for that matter).

I identified with some details of Arianna’s daily life, life how she had to tidy up the kitchen because Ethan could not wash his cereal bowl, but he would complain about how she was always busying herself in the kitchen. Or how he was perfectly alright sitting in a living room full of scattered toys, as if they were non existent. My husband is a willing participant in doing the house chores, but he is still to appropriate my motto “do the small things now, so they do not reach big things status”. On the other hand, I admire Arianna’s ability to see the other’s possible point of view right away, I first explode, and then think about anything else. 🙂  What did you identify with, and what is something you will never be able to pull off?

I identified with many of the same things in the book. I cringed at the scene when Ethan chided her for busying herself in the kitchen when he hadn’t cleaned up after himself. I was actually really upset that she didn’t speak up and SAY SOMETHING to put him in his place (as I surely would have done). That aspect of their relationship really hit close to home for me and I wonder if it negatively colored the way I saw them (that dynamic is one of the most destructive in my own marriage). I also recognized that Arianna dealt with those scenarios–and many others–in ways that I never would. She was much more likely to internalize frustration and disappointment whereas I generally voice those feelings, sometimes without considering–or downright disregarding–consequences. I was careful to take note of how her method worked (or didn’t) for her and wondered if I would benefit from similarly bottling up feelings of resentment or confusion or sadness. In the end I think we both tend to veer too far to our own ends of the spectrum, and that Arianna would benefit from speaking her mind more, while I would benefit from sitting on things for a few days instead of blurting them out in the heat of the moment.

Does it bother you when a sequel requires reading other the other books in the series? I generally like to be able to jump in anywhere, but I felt that Apart At The Seams wouldn’t make much sense (in terms of Arianna’s and Rachel’s relationship) unless you have read the previous book(s).  Do you prefer series books that can stand on their own, or do you like the serialized aspect where you must read the books in order?

I really like series and I ALWAYS want to start with the first book. I could never skip books in a series, even if I had heard that later books are better than earlier installments. I agree that this book wouldn’t stand as well on it’s own as I expected, given it’s not actually a sequel but a parallel novel. There was much (maybe everything?) about Arianna and Rachel’s friendship that needed further explanation without knowledge of the first books. As someone who always reads previous installments first, this didn’t bother me, but I could understand how it would if you wanted to read this book without finishing the others first.

Me and my bear

What Gets a Mention (and how much)